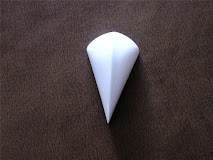 This Asgard Control Stone is a resin cast replica from a hero prop.

The Asgard control stone, was created by Thor and used by the Asgard to activate and interface with their technology, as seen in fifth season episode revelations.

For sometime it had been known that the Asgard were a dying race, and after acquiring a genetically deteriorating disease from their last attempt to solve their problem, it was evident to the Asgard themselves that there was nothing left they could do. The computer core was the Asgard Legacy, and their way to ensure they were forever remembered by the intergalactic community.

Installed on the Tau'ri ship: the Odyssey. This computer core contained all of the Asgard's most up-to-date knowledge as well as their entire recorded history. Included in the computer core was information on all of the Asgard's beaming, time dilation, shields, weapons and hyperdrive technologies etc, and an Asgard power core; the time dilation technology being integrated within the core itself. The core is very user friendly. A user could download a simple program instructing the core to perform a very broad function without needing to have a detailed knowledge of the specified function, the core would "fill in the blanks". The core could also present a holographic image of any Asgard on record as an interface, intended to assist any humans who do not understand the Asgard language and/or the technologies themselves.